Posted by Four Brits And A Book on April 12, 2015
Posted in: Excerpt, Giveaway, Jo, Release Day, Teaser. Leave a comment

Title: Intercepted (By His Game #3) 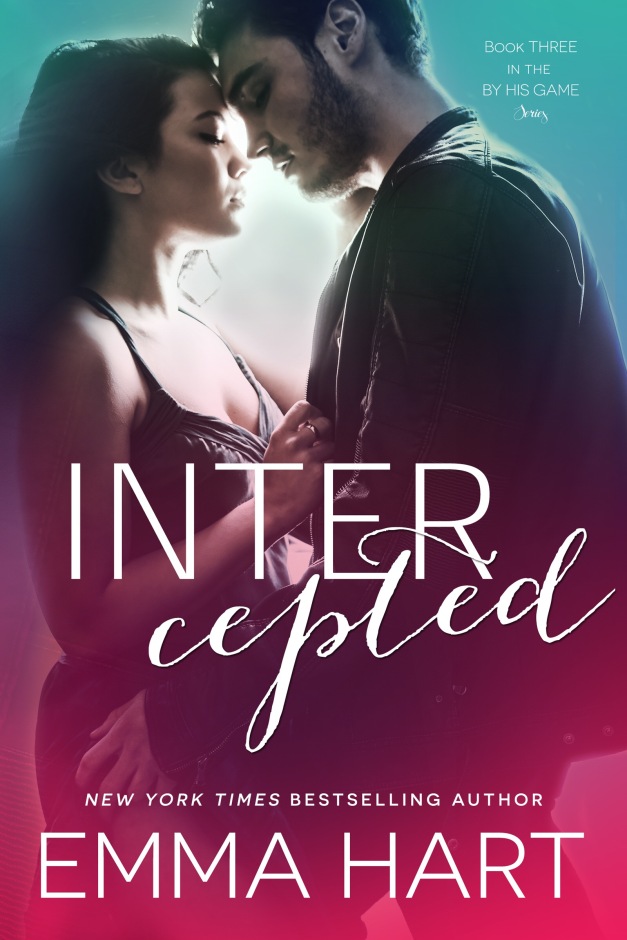 In the third and final book of the USA Today bestselling By His Game series, the rules of the game no one knew they’d have to play are blurring, and when the past becomes the opposing team, hearts aren’t the only thing at stake of being lost…

Finding naked pictures of her best friend on her boyfriend’s phone wasn’t in Everleigh White’s five year plan. Neither was moving back to Los Angeles, the city of dreams that never managed to make hers come true. There’s only so many years you can be in love with your best friend before you realize he’s never going to love you back, after all. If only her ex would stop showing up at the gym where she works, she’d be much happier.

Being a father at nineteen wasn’t how Reid North, the Vipers’ wide receiver, imagined his life going, but when his ex-girlfriend tricked him into parenthood, he accepted it. Eventually. Now, with his ex on the verge of being released from prison, he’s holding onto full custody of his seven year old son, Leo. Football and Leo have left Reid no time for dating… Until Everleigh comes back.

His best friend his whole life, Everleigh never knew Reid loved her. She left before he could tell her. Now she’s back in front of him, and he’s not letting go. Even if all he gets is her friendship again. But in a city like L.A., dreams come true when you’re least expecting it.

With their exes beating down their doors with demands and explanations, their hesitant and building relationship is threatened at every corner. They’re at serious risk of being intercepted by the past, and that’s a ball Reid is determined to catch.

Except desperation can lead to stupidity—and Reid soon realizes he can’t catch every ball, no matter how perfectly it’s thrown to him. This time a fumble could cost more than a few points.

It could cost him everything.

(INTERCEPTED is the third and final book in the By His Game series and can be read as a standalone, although it is advised to read BLINDSIDED and SIDELINED before, in this order.)

“Why’d you leave, Ev?” I ask her quietly, sitting forward. “Why didn’t you tell me? Why’d you ignore me?”

“I know!” Her eyes snap to mine and she twists her whole body to face me. “But I couldn’t say goodbye to you, Reid. It would have hurt me too much to do that. And it was pathetic and childish, but there. It was easier to run without thinking of you as long as it meant I didn’t hurt even more.”

I reach over and rest my hand against the side of her face. Tears are shining in her bright-blue eyes, making them gleam even more brightly. When one drips over her lower lid and onto her cheek, I catch it with my thumb and wipe it away.

I move along the sofa, closing the distance between our bodies, and pull her face toward me. “Don’t cry, Ev,” I whisper just before I lean in and cover her mouth with mine.

She draws a breath in through her nose, but she doesn’t push me away. She wraps her hand around my wrist at the side of her face and moves in toward the kiss.

Her lips are soft and sweet, and if the way I’m kissing her is half as tender as she feels, then dammit, I’m fucking screwed.

By day, New York Times and USA Today bestselling New Adult author Emma Hart dons a cape and calls herself Super Mum to two beautiful little monsters. By night, she drops the cape, pours a glass of whatever she fancies – usually wine – and writes books.

Emma is working on Top Secret projects she will share with her followers and fans at every available opportunity. Naturally, all Top Secret projects involve a dashingly hot guy who likes to forget to wear a shirt, a sprinkling (or several) of hold-onto-your-panties hot scenes, and a whole lotta love.

She likes to be busy – unless busy involves doing the dishes, but that seems to be when all the ideas come to life.

Other Books in the Series:

From Emma Hart, the New York Times bestselling author of the Game series, comes a brand new series where the game is realer, the tension is tighter, the sex is hotter, and the stakes are the highest of all…

What happens when the out-there It-Boy of football meets the secret It-Girl of fashion?

As the daughter of Hollywood’s sweetheart, Leah Veronica can’t even buy a coffee without finding her face on a magazine stand, so it’s no wonder she’s launching her first fashion line in secret. With it debuting at New York Fashion Week in just under a month, extra time in the spotlight is the last thing she needs.

The son of the best quarterback the league has ever seen, filling legendary shoes as the L.A. Vipers’ quarterback was inevitable for Corey Jackson. So was meeting Leah Veronica—the first girl to hand him his ass without putting a hair out of place.

Getting the handsome, prickly blonde into his bed becomes his number one goal. But getting the sexy, over-confident footballer the hell away from her becomes Leah’s—at least until she realizes the best way to do that is to give him what he wants.

If only it was that simple.

When Corey discovers who she is, and private photos of Hollywood’s finest find their way online, everything they thought they knew is thrown into disarray.

And when secrets are exposed and hearts are shattered, they have to figure out if they’ve been blindsided by love or reality, and if it’s worth running the extra yard to win the game they never meant to play.

When the game leaves the field in the second book in the USA Today bestselling BY HIS GAME series and mixes with sex, lies, and betrayal, the future isn’t the only thing on the line…

Macey Kelly has sworn off men. Unless they’re going to zip in and out of her apartment—and her vagina—quicker than they can give her an orgasm, she’s not interested. Finding out her boyfriend of three years got her cousin pregnant was a total confidence knock. Luckily for Macey, confidence is

something she has in abundance, so all Mitch’s asshole move did was make her pretty cynical toward men.

The last thing Jack Carr needs at the start of the season is for a dark-haired, sexy as sin, gyspyesque beauty to be consuming his thoughts. Football is his life, which leaves no time for girls. Unless they’re the love ‘em and leave ‘em girls. Becoming one of the best running backs the league has ever seen by racking up the yards is his top priority… not bedding Macey Kelly, despite her affinity for blow jobs and total sexual abandon.

Avoiding each other is the perfect solution, but when your best friends are in a serious living together kind of relationship, that isn’t always an option. Sometimes, sex on tap is the easiest option. And the sweetest.

Until Mitch shows up with a bombshell that could shatter Macey’s perfectly carved out life. It’s been a year, but he isn’t giving her up, not now he has a chance at winning her back. And he knows her buttons. Every single one of them.

Unfortunately for him, Jack Carr isn’t a loser. The star running back has his eye on the Vince Lombardi—and on Macey. But seeing her hanging between them both isn’t something he’s down with, not when he discovers why she’s so against anything more-ish, as she puts it.Macey quickly realizes she’s the ball being passed between two desperate yet opposing teams, and that only one of them can score the touchdown. But will the winner be the guy she lived with and loved for three years, or will the winner be the guy who understands her and makes her body come alive?

In this game, someone will be sidelined, and calling the play isn’t always as easy as it seems.

(SIDELINED is a full-length, standalone novel. It’s not necessary to read BLINDSIDED before this book, but it is advised.)