Posted by Four Brits And A Book on October 10, 2014
Posted in: Blog Tour, Excerpt, Giveaway, Jo, Review. Leave a comment 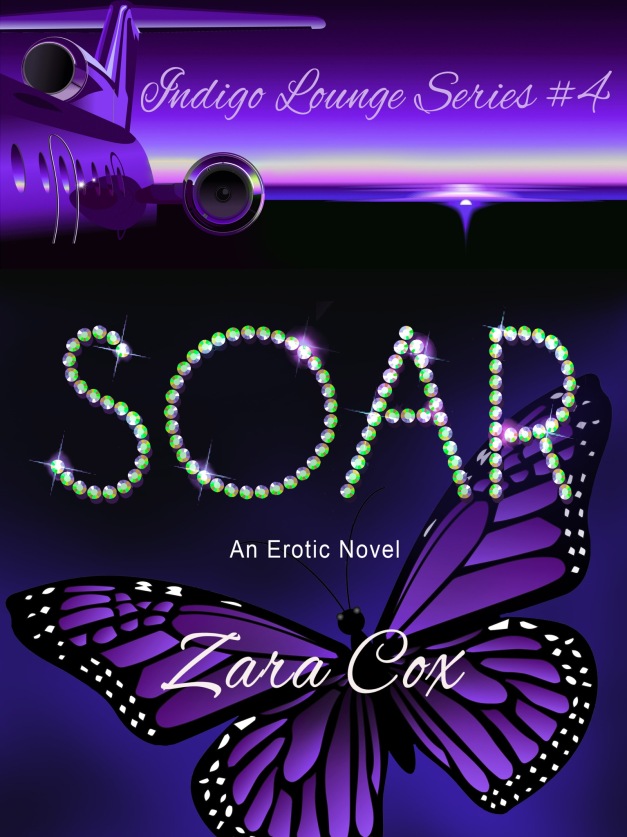 SOAR is the sizzling conclusion to the Indigo Lounge Series.

Dark and sinfully sexy Noah King thought he had left his past behind in New York. In Leia Michaels he thought he’d found his kindred spirit and an answer to all his unrelenting cravings.

But the past is not done with him. When his future explodes in a shower of nightmares he can’t walk away from, he’s left with an unconscionable choice.

For a painfully brief time, Leia imagined she was free at last. Free to contemplate a future with Noah King. But returning to Miami brings a whole new set of nightmares.

She craves a man who will never be hers. And her shadows of her past are closing in on her.

For the lovers of Sylvia Day’s Crossfire series, comes the next scorching story from this bestselling series.

Warning: this book contains explicit scenes of scorching sex, heartache and emotional highs that will leave your pulse racing. 18+ only.

To say I have devoured the entire Indigo Lounge series is an understatement. It is very easy to lose yourself in the works of Zara Cox and find that with every page you fall deeper in love with the characters and more and more invested in their stories.

With Spiral and Soar it was no different. Noah and Leia. Leia and Noah. Wow. Just. Wow.

The chemistry between our two lead characters did not diminish despite the butt load of crap they’d had thrown at them since returning early from their time aboard the Indigo Lounge. Their highs soon forgotten and returning to real life with a bump had me desperate for time to rewind and for them to go back to their haven at 30,000 feet!

But, no such luck. Poor Noah. Poor Leia. Leia decided she wasn’t strong enough to handle what had been thrown her way via Noah’s past so bolted.

This started the fight of their lives. Noah fighting for Leia. Leia fighting herself. Who will win?

Come on, as if it was a question!

The ending? Amazing. My heart broke for both characters throughout the book and although it wasn’t an altogether happy affair the ending did tie off with a neat little bow. And my soul soared along with theirs at the story’s conclusion.

Zara, darling Zara, what a talent you have! I am so excited to see what you bring us next! ❤

“…the King of Oaks and Owner of my Heart.”

She squinted at the dashboard, then blinked his way. “It’s nearly midnight, Noah.”
“What’s your point exactly?” He eased away from the traffic light and turned left onto the street that held a row of trendy bars and coffee shops.
“My point is I have to be up early to go to work and I need to get a good night’s sleep.”
“A good night’s sleep, huh? Tell me, Leia, how did you sleep last night?” he asked softly.
“What? Why are you asking me that?”
He swung the car onto a side street and parked in the employee area of a one-story building. Killing the engine, he turned to her, sliding a hand behind her headrest. “Tell me you slept like a fucking baby last night after you walked away from me.” His smile felt like it was carved from granite. Moving his hand, he caught a strand of hair between his fingers and caressed its silkiness. “Tell me that so I can congratulate you. Or call you a fucking liar.”
“Noah…”
“Or tell me you lay awake, your gut turning to stone every time you thought you’d never see me again. Tell me that so I can accommodate the fact that you’re a tiny little bit human.”
Her eyes widened and her breath rushed out between shocked, parted lips. “What good would that do either of us?” she whispered.
“It would make me feel a helluva lot better knowing I wasn’t crazy. That I didn’t spend last week losing my head over a heartless bitch.”

Fun Facts:
1. I’m British but am often mistaken for an American.
2. I’m a HUGE Formula 1 Fan. As in DIE-HARD ADDICT!
3. I once spoke to Gary Barlow (lead singer of TAKE THAT) on the phone!
4. I write in bed (where I get my best ideas!)
5. I’m painfully shy and often cover it with talking too much!!
6. The No.1 thing on my bucket list is to tandem sky-dive attached to a super-hot guy (what a better way to plummet to my death?).
7. I read three or four books at the same time and often have books scattered throughout my house so I always have reading material to hand.
8. My husband thinks I’m afraid of spiders. I choose to let him believe that.
9. I’m obsessive about my book boyfriends, especially the one I write!!
10. In another life, I’d love to be an inventor of sex gadgets. Or a racing driver!