Posted by Four Brits And A Book on August 1, 2014
Posted in: Blog Tour, Giveaway, Jo, Review. Leave a comment 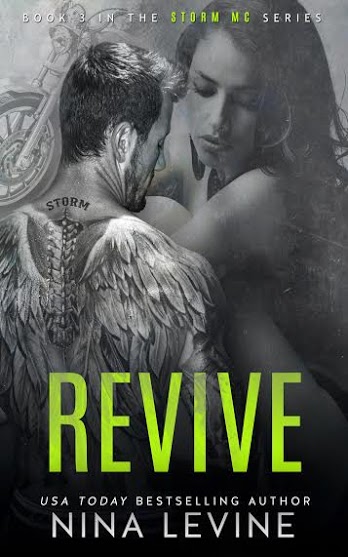 Synopsis –
He doesn’t do relationships. Neither does she. But they can’t fight the attraction any longer…

Nash Walker hides the demons that consume his soul. He buries them deep and distracts himself with sex. Anything to avoid facing a past full of heartbreak and regret; anything to numb the pain that he struggles with daily.

Velvet Carr has spent years fighting her demons. It’s a fight she’s winning. That is, until Nash crashes his way into her life and into her heart.

It started out as a bit of harmless fun between friends; it wasn’t meant to get complicated for either of them. But when two broken souls come together and arouse unwanted feelings in each other, complicated is what happens.

Can Nash and Velvet help heal each other and revive the love in their lives that they’ve both been refusing to allow in for years? Or will they let their demons ruin any chance they may have at happiness?

My review –
Revive is the continuation of the Storm MC series. The first two and a half books don’t need to be read but it helps to get you the back story to the club, club house and characters’ lives.

Revive is Nash’s story. Oh, Nash. I want to smoosh his cheeks and then do untold naughty things to him. I fell in love with him. Hard. God knows I love me a brooding, dark male lead!

Nash harbours a secret. One his family know but that’s it. He has his ‘brothers’ in the MC but none that know his deepest and darkest secrets. He has a friend in Velvet, the headliner at the MC’s Strip Club but she doesn’t know his deepest and darkest secret. Hell, we’re seeing a personal insight into his life and WE don’t know!! This hidden truth has been eating at Nash for almost a decade without closure, without moving on and without release.

Velvet had a promising future. From a ‘trailer trash’ background she received a scholarship to college to study law. She met a boy. They fell in love. She left college behind to get married and be a good little housewife. Her husband, James, was a d*ck and screwed her over. Divorced for 5 years, Velvet had made herself into a strong, independent woman and was finally making something of herself at 32 years old.

This story is about their friendship turning into a casual relationship into something else. It’s a succession of events full of intrigue, guesswork (on our part!) and frustration. At times I just wanted to bang their heads together!

Nash hasn’t leant on anyone for a long time. He’s always been the dependable, strong, head male and for him to need someone, to rely on someone it was a show of weakness. One he didn’t need in his personal life nor at the club house.

This book and the story of Nash and Velvet tugged at my heart strings. They both had less than happy pasts and bad, scarring memories but they found lightness and relief in one another. Whether it’s the right time for them remained to be seen.

This is the most emotional of the Storm MC books and I devoured it, staying up until the early hours with a deep need to finish it! Both Nash and Velvet’s pasts made me shed a tear and the final reveal just made me sob like a child. A fantastic read with an immense depth of feeling that left me reeling and needing more.

And the twist at the end? WOAH! Sorry, no spoilers here! Go and read it for yourself to find out! Thank you, Nina for another fab read!

I watched Nash as he walked from the bathroom back into the bedroom. Dressed in nothing but a towel, water still dripping from his hair and down his body, I couldn’t take my eyes off him. Ink covered nearly every patch of skin on his neck, chest, stomach and arms, and I realised I didn’t have a clue what the significance was for most of his tattoos. Unfortunately, we didn’t have time to get into that this morning; we had to be at Harlow’s cafe in just over an hour. She was testing out some new cake recipes for the cafe and had asked for volunteers to test them. Nash didn’t even have to think about it; he’d accepted straight away, and I could never say no to Harlow’s food. I made a mental note to ask him about his tattoos tonight.
“You going to stare at me all day, baby, or get ready?” Nash asked with a smirk.
As he said this, he removed his towel and finished drying himself off. Of course, my gaze was diverted lower, and I took in everything he had to offer.
Sucking in a breath, I murmured, “I think I could happily skip Harlow’s food if it meant I got to stare at you all day.”
Desire flashed in his eyes, and he closed the distance between us in two determined strides. Curling his hand around my neck, he growled, “I’d eat you over her food any day of the fuckin’ week.” He pulled me closer and dropped his lips to mine. We’d had sex twice already this morning, but our need for each other was never fully satisfied, and his kiss told me how much he wanted me again.
I placed my hands on his chest and gently pushed until his mouth let me go. “Nash, I don’t want to let Harlow down.”
“I’ll make it quick,” he promised, his eyes almost begging me to agree.
My body was screaming ‘hell yes’, but I pushed him again, and took a step back. “There’s not enough time; I’ve still got to do my hair and face.”
“They look fine to me,” he said, clearly not wanting to let this go.
“That’s because you only care about my boobs,” I said as I walked towards the bathroom.
“And your pussy, babe; I care about that too.”
My back was to him, but I could feel his eyes on me. I turned to give him one last look before I went into the bathroom, and sure enough he was staring at my ass. “Tonight, they’re all yours.”
“Seriously? You’re going to say no to this?” he asked, his hand pointing at this dick.
“I know it’s hard for you to believe that any woman could ever say no to that, but yes, I’m saying no,” I said, teasing him a little.
He shook his head in disbelief. “Why the hell did I choose the only woman on this planet who has the ability to knock me back?” he grumbled.
“Obviously your brain was doing the thinking that day, rather than your dick,” I shot back at him.
I began applying my makeup, waiting for his comeback, but he didn’t say another word. I could hear him getting dressed so I figured our conversation was over, and I focused on getting ready.
A couple of minutes later, he appeared in the doorway. I continued applying makeup, but watched him in the mirror. He was leaning against the door with his arms folded across his chest. His eyes were roaming over my body, and electricity shot through me. I wanted him just as much as he wanted me.
“Nash, you need to leave because if you don’t, we’re never going to make it to Harlow’s.”
He continued devouring me with his eyes, until finally he pushed off from the door, and made his way to me. Standing behind me, he gently swept my hair to the side, and bent to kiss my neck. His hand slid around my waist, and he murmured, “Fuck, I could watch you all day, sweet thing. I don’t even need my cock in you to be a happy man, but tonight there’ll be none of this denying me shit going on.”
My body tingled with lust. “You do realise that I could never fully deny you, baby. If you really pushed the point, I’d be yours in a heartbeat,” I admitted.
“I kinda like it when you say no. It excites the fuck out of me to have to chase you. But, I appreciate the fact that the word no isn’t one that comes out of your sweet mouth very often.”
“I’ll be sure to use it every now and then; I like it when you chase me.”
“Fuck,” he muttered, and straightened. Taking a step away from me, his eyes found mine in the mirror, and he said, “This is going to be the longest fuckin’ day, babe. Harlow better appreciate what I’m giving up for her.”
I smiled sweetly at him, more to tease him than anything because I knew this kind of smile did him in. “I’ll make it worth your while, Nash.”
He raked his hand through his hair. “I’ll be fuckin’ holding you to that,” he promised.
He muttered something else under his breath that I didn’t quite catch and then turned and stalked out of the bathroom. I loved getting him going; it had to be one of my favourite things to do. The thought of Nash and what he’d do to me tonight had me all hot and bothered. He was right; today really was going to be a long day.

About Nina Levine –
USA Today Bestselling Author Nina Levine, is an Aussie author who writes stories about hot, alpha men and the tough, independent women they love.
When she isn’t creating with words, she loves to create with paint and paper. Often though, she can be found curled up with a good book and some chocolate.